A large number of dung beetles were set loose on the Māhia Peninsula on Tuesday as part of a community initiative to improve the soil quality and manage run off from farm paddocks.

Local Māhia school children participated as part of the Hills Country Futures project citizen science initiative, run by Whangawehi a group formed to raise awareness of the health of water catchment in the area. 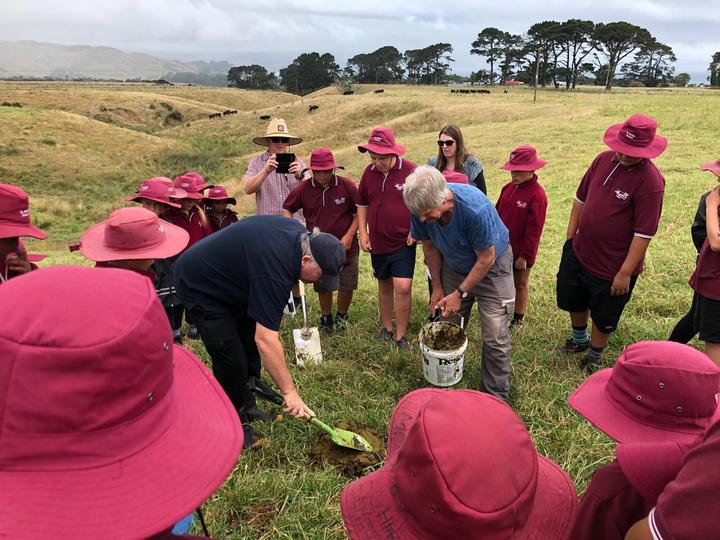 Otago University emeritus Henrik Moller is one of the scientists who was there today and explains why the beetles are so good for the soil and the water.

“It was amazing fun, the kids really got into it, there was a fair bit of mayhem and poo flying around.”

The students made “really big poo sandwiches” he said and sealed the beetles between two layers of dung.

The beetles will do vital work, Moller says.

“We need dung beetles, we brought cattle and goats and sheep out here, but we didn’t bring with them the dung beetle fauna that existed where we brought them from, and that means we haven’t had this army of insects to bury and disperse the dung.”

He says the goal is for every farm to have the busy beetles in the paddock.

“Just like earth worms, they build the soil, they put carbon in the soil, the dung beetles build tunnels and then those tunnels act as tubes, build water, and improves the ability of the soil to hold water when drought comes so that’s good for farmers.         “

But most importantly the beetles bury the dung, he says.

“Most of all we’re worried about dung staying in the soil rather than washing off into waterways. Dung beetles attack the problem in the paddocks and reduce the amount that’s reaching those riparian strips. The two systems work really well together.”

Moller says there is little chance of a plague of beetles doing more harm than good.

“We do have fifteen species of native dung beetle, but they all live in forest and they don’t fly. These introduced species don’t venture into the forest, so we’re really certain there won’t be any unintended consequences.”

He’s calling for a People’s Poo Beetle Movement to have these busy creatures all over Aotearoa, but says despite them breeding quickly we’ll need a lot of them.

“We need millions upon millions of these things around New Zealand.”

Moller says he saw the beneficial effects of the beetles on a farm in Kaipara just last week.

“I think over 70 percent of the dung, even the fresh ones, had beetles in already, you roll them over and there’d be tunnels underneath it where the beetles have drilled down into the soil and they’ve kind of bulldozed the dung down into it sometimes, there’s be five even eight of these tunnels under each individual pat.”

That farm introduced the beetles five years ago, he says.

“It took five years to build up those numbers on that farm. We need billions of them out there.”

James Barringer and his team from Landcare Research are coming to Mahia on the 11th of March 2020 to deploy an array of soil moisture probes as part of the “Hill Country Futures” lead by B+L NZ. The long term goal will be to develop a soil water holding capacity model linked to a legume growth model for Mahia.

This research theme is designed to link with the broad national scale mapping of legume suitability (objective x.1).  It recognizes that hill country farms are diverse landscapes and seeks to give farmers tools to make robust decisions at the farm-scale about suitable locations for various forage legumes.  It seeks to use micro-scale indicators – soil moisture and soil temperature – to help guide farmers to identify where on their farm different forage mixes are most likely to do well.  The information is likely to be valuable beyond this specific goal.  Success in this project should lead to farmers being able to monitor these indicators at a few sites on their farm to predict conditions across the whole property, leading to more effective and timely decisions that lead to improved economic, environmental and social outcomes.  In the future, sharing data across the farming community could lead to even more robust predictions across the whole hill country environment.

This exercise will involve us coming to several farms to establish a sensor network with 20 moisture/temperature sensors attached to a LoRA data logger which would be run for 2 years from June 2020.  Each data logger signals back to a LoRA gateway that is established at a site with cell network coverage – though note the cell reception does not have to be sufficient to hold a verbal cell phone call – just to transmit small data packages.  All the LoRA data loggers must be set up roughly in line-of-site of the LoRA gateway – although the latest LoRA technology does well at seeing into partially hidden parts of the landscape.

We will be releasing a large number of beetles with the aid of the local school children at Mahia Peninsula (Hawkes Bay) next Tuesday, late morning.  This is part of the Whangawehi Catchment Management Group initiative (https://whangawehi.com/), a farmer and Marae led collective, supported in part by Beef & Lamb NZ. School children will be involved in the release as part of our Hill Country Futures project’s citizen science initiative.

Dung beetles are game changers.  They will build and retain soils, integrate nutrients into the soil profile and cut off run-off at source (within the paddocks).  Releasing them complements all the hard work done by regional council and the Whangawehi Catchment Management Group to plant riparian margins to reduce run-off reaching the streams.  Dung beetles will also help farm productivity by building healthy soils and disrupting nematode transmission between stock, so reduction in the need for fertilizer and drenches are likely in the long run.

We have written to several Ministers to come to help the children release the beetles – basically by making a series of pooh sandwiches – pooh is piled up, a teeming mass of beetles are dunked on top, and a bucket of extra pooh is then dumped on their heads to prevent them flying away.   We expect that the involvement of school children up to their elbows in pooh will help spread the message.

It’s a national interest story with a fresh angle that shows farmers and locals teeming up to help each other. The school kids are also setting up a terrarium in their classroom to watch the way they devour the pooh and bury it in dung balls.

We have invited the following Ministers and await their response: