With some careful planning & preparation, the senior class finally set off for there first visit to the Whangawehi shelter on the 28th February 2018.  Initially this visit was planned for November 2017 but had to be postponed as it was rained out.  The weather was perfect for an hour’s hike over O’Brien’s farm this time round, with two vehicles bringing up the rear, carrying SHMAKs and other resources. At the shelter we split into two groups. The boys headed down to the stream with Arthur and Jenni and two dads. Testing the stream was interesting, though few creatures were found – plenty of snails in the algae and a few worms were. 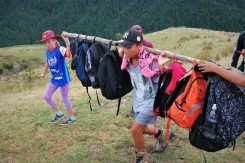 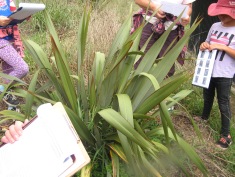 The water was clear. Meanwhile the girls were investigating the difference in the 8 cultivars of harakeke growing around the shelter. The groups then exchanged places but this time the stream group went to a stonier site and found at least 15 inanga hungrily feeding on grasshoppers who had leapt to their death into the stream. More invertebrates were discovered there under the stones.

The hike back was a challenge for some, but we all arrived back at school cheerful and with a great experience to share.  We look forward to the Rocky Shore field trip planned for March.