On the 28th March, the Whangawehi landowners gathered to meet with Nicola Henderson from the New Zealand Access Commission. The meeting was about finalizing the final route for the walkway in which all the landowners would agree too and feel comfortable with.

The day got underway at the Whangawehi boat ramp.  Present on the day was Bevan Parker Manager of Pongaroa Station, Graham Douglas Forest Manager for Grandy Lake Forest, Malcolm Smith from DOC and Nicola Henderson from the NZ Access Commission.

We headed off towards the top of the mountains and accessed different track options. We were amazed to see that Graham Douglas had cut a new track and even organised a car park area along the Kinikini Road. The group also accessed another track that connects with the DOC reserve. The later option would offer a loop track starting at the reserve through the forest and finishing at Kinikini Road.

The next step will be to receive written agreement from all land owners to survey the route and create an easement that will be recorded on a land title.

We will keep you posted on future developments. 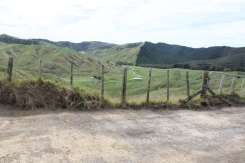